The New York City mayor's race has grown more vicious in recent weeks — and the favorite target is Yang, who has come under attack for everything from his basic income and tax plans to his employment history and his second home upstate.

The aggressive hits on Yang reflect his status as front runner in recent polls, as the more established politicians who are now trailing him in the Democratic primary race scramble to take him down a notch and make an impression with the roughly half of voters who remain undecided.

New Yorkers will, for the first time, choose a new mayoral candidate in the June primary using ranked-choice voting — a system that allows voters to rank up to five candidates in order of preference, and which proponents predicted would cut down on negative campaigning.

But lately, the race has looked more like what Brooklyn Borough President Eric Adams predicted over a year ago, when he declared, "Trust me, It's going to be a dirty campaign."

Adams, a Black former NYPD captain who is polling second to Yang, has been among the most aggressive in going after the former presidential contender.

"This is not a startup. This is a city where a leader must have been a worker. People like Andrew Yang never held a job in his entire life," Adams said at a recent event where he snagged the endorsement of the city's largest municipal workers union. 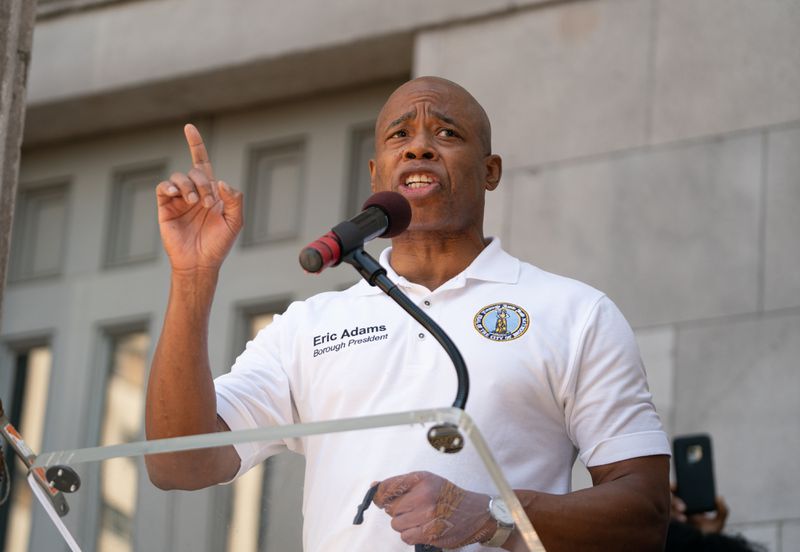 Yang has in fact been employed in several jobs, but Adams is betting that his opponent's background as a Brown and Columbia grad who worked as a corporate lawyer, and then at startups and a tech non-profit, won't resonate with working class voters.

"We don't need someone that has never gotten up in the middle of the night to walk, to eke out a living for their family," Adams said.

The broadside drew a particularly pointed response from Yang's camp, who accused him of hateful rhetoric amid a spike in anti-Asian attacks. "Eric Adams today crossed a line with his false and reprehensible attacks. The timing of his hate-filled vitriol towards Andrew should not be lost on anyone," said campaign managers Sasha Ahuja and Chris Coffey.

So far, neither the hits from his rivals nor a series of early missteps by Yang himself show evidence of halting his momentum. But with scarce public polling in the race and a large share of voters not yet tuned in, the contest remains very much up for grabs. Around the same time in the 2013 mayoral election, current Mayor Bill de Blasio was polling in fourth place.

With that in mind, Yang's rivals are trying to define him as an out of touch neophyte with little knowledge of the city's inner workings, while the frontrunner goes for the image of cheerleader-in-chief, rooting for the city's comeback from the Covid-19 crisis.

Adams has gone after Yang's plan to give cash payments to some New Yorkers, a modified version of the universal basic income program that was the centerpiece of his presidential campaign. Adams calls it "U-B-Lie" and a "snake oil" plan.

He has also slammed Yang for leaving the city at the height of the Covid-19 pandemic, after POLITICO revealed that he spent much of his time at his second home in upstate New Paltz. "When others fled, I led," Adams said, comparing Yang to Texas Sen. Ted Cruz, who took a much-mocked trip to Cancun during a power crisis in his state.

Not to be outdone, City Comptroller Scott Stringer staged a press conference to go after Yang for saying a bus route that bans private cars in Flushing, Queens, should be re-examined.

Stringer called the comments proof that Yang is "pandering" and can't be trusted to stick to his pro-transit stances. "The first sign that somebody pushes back on innovative transportation infrastructure, Mr. Yang takes it all back," Stringer said.